Almost a year in France (newsletter) 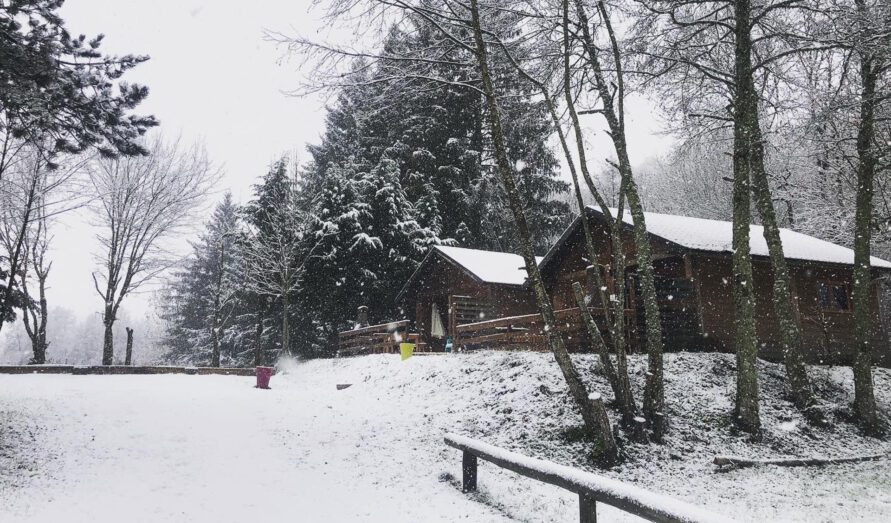 In two weeks it will be one year since we were waved goodbye by our friends and family in the early morning. We left our temporary home for France and had our greatest adventure ever. In this end-of-year newsletter we look back on a beautiful, tiring, challenging, educational and of course very special 2022.

It took a lot of effort and it seemed for a while that we were in deep trouble. The Dutch car insurance would no longer provide coverage, according to the lady on the phone. However, despite frantic efforts, we were still unable to export the Fiat to France. It seemed that we first had to hand in the number plates with the original registration certificate to an RDW-approved company in the Netherlands to get that done.

It was then expected that we would have to wait 3 to 4 weeks before the procedure was processed here, due to administrative backlogs. Without registration and insurance we would of course not have any transport here, which is simply not an option for both business and private life in this vast region. While we were forced to forge plans for a return trip to the Netherlands, the redeeming message arrived; a sleeping official has approved our incomplete application (without export documents). We arranged the insurance here and a few days later we were able to collect our French number plates!

At the end of October we expected it to be quiet in the village. Nevertheless, we decided to organize something around Halloween. We decorated the shop and bar with cobwebs, skeletons and pumpkins. The screen in the bar, which normally shows the video of the campsite and its surroundings, was transformed into a terrifying living painting. In addition, we projected a ghostly show with sound on the shop window, which could be heard and seen from outside. It turned out to be a creepy fun evening with rave reviews. Next year we are determined to go even bigger, because this theme evening left us wanting more.

So far, little snow has fallen and the forecasts for the next two weeks even reach 14 degrees. However, when we arrived here in early January, there was a good pack of snow and more often than not it was freezing. Of course we wanted to anticipate this, to prevent us from being attacked by the freezing cold. When our campers were on the road, we therefore attacked the site. The chainsaw, hedge trimmer, leaf blower and scarifier were used to the maximum. The latter was not even able to withstand our violence and abandoned us.

More than a meter was removed from all hedges and the trees were rigorously pruned back. We bought a wood chipper and were able to reuse so much of our pruned wood as ground cover. We let the water out of the Mobil Homes and we blew through the pipes, so that everything cannot freeze to pieces again. We drove endlessly to the landfill in Marcenat to take away green waste, even 13 times in one day! It was a huge job, but we were ready for winter in plenty of time.

With the winter season approaching, we were also forced to light the stove again at the beginning of November. We had 1000 liters of fioul delivered and in no time we had re-ignited the old oil heater. About the same time, the beast broke down again. For days we tried to unclog the pipes, we dismantled parts and cleaned the place. To no avail, we couldn’t get more than a little smoke out. We called a maintenance engineer and made an appointment, but – as is often the case here – of course no one showed up and we never got a call back.

Meanwhile, frustration took over and with more luck than wisdom, Jelle got the stove back in operation. Fingers crossed, but it still works to this day. In the same period we received a letter from energy company EDF; our rate per kWh would increase by 200% on 1 January. With the relatively high consumption that our company entails, this is simply not possible. With great sadness we came to the conclusion that this could be ‘game over’. We spent hours calling, with EDF itself, with independent advisors and a handful of charlatans. Then it turned out that EDF is obliged to offer us a regulated rate as a small company. However, they only do that if you ask for it yourself… Again on hold for a few hours and several calls later, we managed to limit the damage to an increase of 12%. So our adventure isn’t over yet…

After we prepared the site for winter, Dennis spent his time behind the computer. Our reservation system website didn’t offer the flexibility we wanted and had some snags for us on the back end. We selected and bought a new theme for our WordPress environment and rebuilt the entire site. This means that our digital facilities are also completely ready for the upcoming season.

One of the things that appealed to us about the idea of ​​running a campsite is the seasonality. In the run-up to our first high season, we have been working day and night to get everything done in time. This was followed by a tough period, in which we worked our butts off to make everyone happy as much as possible. Moreover, we had continuous arrivals and departing guests, for which you simply want to be present.

It is now significantly quieter and we finally have some time to enjoy our first low season. Occasionally someone else stays in the chalets and we occasionally have people with the camper on the site. While we remain open and of service to them and the people who spend the winter in the village, we also gratefully reap the benefits of the freedom that our new existence offers us in that low season.

For example, we regularly go out to look for waterfalls that are unknown to us and we go on hikes and walks in the breathtakingly beautiful surroundings. There is time to visit people we have met here and who invited us months ago. We can also occasionally go out for a nice meal and go out with our English friends Chris & Michelle. Their predilection for board games has given us several new favorites. For example, do you already know “The sock game” or the crazy “Hotdog & Chicken”? Highly recommended for those who want to put something nice under the tree at the last minute 😉

As we got further into the post-season, we became more and more curious about our broadcast of ‘Ik Vertrek’. The television crew had contacted us several times to verify their information and then let us know that the episode is all set. One day we saw our names appear in a news item on the AvroTros website, but a date was not yet set. We refreshed the page daily and hoped for news. One day we were driving to Clèrmont Ferrand to buy our periodical stock for the shop and bar when the editor called. Our broadcast date has been announced! We arranged a room in the Netherlands to watch with friends and family, blocked reservations and provided a sitter for the dog and cat. The date has now been moved and we have had to change everything again. However, we are hopeful that our episode will definitely be broadcast on February 16 at 21:30 on NPO1 (Dutch TV channel).

Around the holidays we receive a few guests in the chalets and on the campsite, after which the first bookings for the new year are also starting to get going. In the meantime, we are taking advantage of the quieter period to refurbish our own house, explore the area further and recharge the batteries for the next season. Through this way we want to thank everyone so much; for celebrating our successes, your compassion, the interest, the massive turnout, the well-intentioned advice, and the occasional encouragement when we needed it. After 50 weeks we can say that we have achieved our dream and we couldn’t have done it without you. Our adventure is a fact and we still have a lot of plans for the future. We wish you all a very happy holiday season and a fantastic New Year, in which we hope to meet you again!